The Thai baht has soared to its highest level against the dollar since the current junta government seized power in a coup in 2014, jeopardizing the nation’s exports and tourism-dependent economic growth just a month before the country’s long-awaited election in March.

The baht traded at 31.19 to the U.S. dollar on Friday, up 4% since the start of the year, as one point reaching its highest level since November 2013.

The appreciation of the Thai currency was steeper compared to regional peers. The Indonesian rupiah and Philippine peso have risen by 2% and 1%, respectively, since the start of the year. The baht was the strongest performer of all regional currencies in 2018.

While the risk appetite of investors around the world turned positive since U.S. Federal Reserve Chairman Jerome Powell signaled a halt in rate rises in January, the Bank of Thailand has maintained its hawkish stance. The country’s central bank held rates at its policy meeting in early February, although two out of six committee members present voted for a rise, even though the bank had already raised rates for the first time in seven years in December.

The difference in policy direction of the U.S. and Thai central banks drew money to the latter market, causing the baht’s rise. A constant current account surplus since late 2014 has also contributed to the currency’s rise. 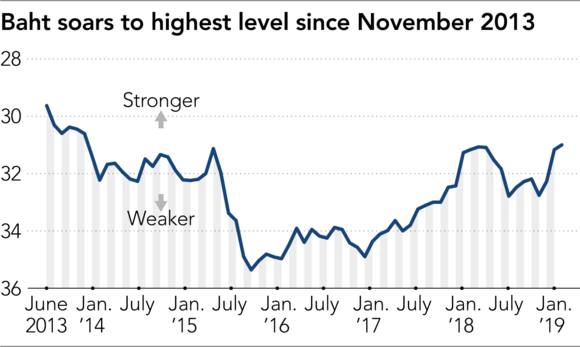 Yoichiro Yamaguchi, chief economist at Sumitomo Mitsui Banking Corp., said that while currencies of countries with a current-account deficit tend to be vulnerable to market shocks, “Thai baht-based assets are considered safer in the Southeast Asia region.”

“In January, foreign investors were net buyers of Thai securities for the first time in 16 months,” said Yukino Yamada, a senior strategist at Daiwa Securities.

Robust economic growth was another factor supporting the baht’s rise. Thailand’s gross domestic product in 2018 increased by 4.1% compared to the previous year, a slight improvement from 2017’s 4.0%, according to the National Economic and Social Development Council.

But if baht appreciation persists, it will impact Thailand’s economy adversely, as its production and consumption are heavily dependent on foreign demands. Exports account for roughly 60% of GDP, while tourism contributes about 20%.

If the baht maintains this expensive level, exporters such as carmakers, electronics manufacturers, or even local farmers, will have difficulty maintaining their export competitiveness. The tourism sector will also suffer, as tourists may find goods and services in Thailand less affordable.

Some Japanese carmakers, which use Thailand as a manufacturing and export hub, have started to voice concerns over the rising baht. For now, the tourism sector is less anxious as the junta government’s tourism-promoting measures, such as waiving arrival visa fees for citizens of 21 countries including China and India, are still boosting visitor numbers.

Policymakers appear nervous, however. The junta government’s economic policies have sought quick ways to capture foreign demand, instead of pushing through structural reforms to boost domestic purchasing power. The strategy has made the economy more vulnerable to the rise of its currency.

A fear of economic slowdown could affect the election performance of the pro-junta Palang Pracharat Party, which has nominated Prime Minister Prayuth Chan-ocha as its sole premier candidate.

On Feb. 14, Deputy Prime Minister Somkid Jatusripitak raised concerns about the rising baht, citing the impact on farmers. He urged the central bank to ensure that the currency will not be allowed to rise too rapidly. “We are ready to take care of irregular movement,” Bank of Thailand Governor Veerathai Santiprabhob said in a separate conference on the same day.

An analyst from Kasikornbank Research predicted that factors behind the baht appreciation, such as the current account surplus and the policy direction difference between Thailand and the U.S., are here to stay and are likely to push the baht even higher in the first half of 2019. But he also said that the current baht price was already at a level at which the central government could jump in to intervene.

The baht appreciated from the beginning of 2017 to early 2018, but the rally was halted at about 31.1 baht against the dollar.

This site uses Akismet to reduce spam. Learn how your comment data is processed.